As #NAIDOCWeek2019 comes to a close, we at Amnesty remember the theme of Voice. Treaty. Truth. as we reflect on an inclusive Australia, celebrating all people as equals and working to bridge that gap between the disadvantaged.

2019 is also the United Nations International Year of Indigenous Languages, so it’s time for that shared cultural knowledge to be heard through one voice in the community and through the people.

We profiled six different Indigenous Australians over NAIDOC Week from different walks of life and disciplines including politics, advocacy, arts, sport and literature, as we celebrated #7DaysOfNAIDOC.

This year’s theme echoes the importance of language, politics and culture – and what a wonderful place to start, as we honour Ken Wyatt, Australia’s first Minister for Indigenous Australians, who is actually Aboriginal.

Liberal candidate and Nyoongar man Ken Wyatt became the first ever Aboriginal person in the House of Representatives.

He held his maiden speech draped in a traditional ceremonial cloak of kangaroo hide (bookha) and wore the feather of a cockatoo. In a rare moment of Australian political history, both sides of politics joined to give him a standing ovation, following his speech.

Ken said he was now preparing for the constitutional recognition debate, and he wanted to be ready.

“To lose a referendum because we hadn’t done our work properly would be a major setback for at least 10 or 20 years.”
Ken Wyatt

“People have expressed their concern at the lack of definition and the lack of clarity as to what the Voice is. We are going to have to articulate the full detail.”

Next up is one of Australia’s most well-known Aboriginal writers, Anita Heiss.

She is constantly working to enhance her readers’ understanding of Aboriginality for which she has been labelled a ‘destroyer of stereotypes’.

Upon stumbling across a copy of ‘Harry Potter’ at a school in the Pilbara during a writing workshop, she began to think about commercial fiction opportunities and started to write a series of ‘Koori chick-lit’ novels – a genre that had never previously existed.

The novels featured four Aboriginal women in their thirties in Sydney, and focused around real problems and lives of Indigenous Australian women.

”These are Aboriginal women who did not appear in contemporary Australian literature until I put them there.”
Anita Heiss

”The whole point to all my writing is to portray the positive stories about Aboriginal people, because everyone else is doing a great job with the negatives.”

Anita is also a Lifetime Ambassador of the Indigenous Literacy Foundation, an Advocate for the National Centre of Indigenous Excellence, an Ambassador of Worowa Aboriginal College, and an Adjunct Professor with Jumbunna Indigenous House of Learning at University of Technology Sydney.

Adam Goodes is a champion Australian Rules (AFL) football player with the Sydney Swans, and he was also Australian of the Year 2014.

Adam is involved with several Aboriginal sport and community programs and he has spent time working with troubled youth, including those in youth detention centres.

Adam is a great role model and advocate for the fight against racism both on and off the field. Because of this, he has endured more than 12 months of booing from audiences between 2014 and 2015, which led to an “I Stand with Adam” campaign against racism.

Adam said he wanted to use his voice and his experience to make a genuine difference.

“If people only remember me for my football, I’ve failed in life.
I live by that quote.”
Adam Goodes

“If I’m only defined by my sport, I really have failed. Yes, I’ve opened myself up for more criticism, but I’m a professional athlete. I get criticised every week. I’m used to it. It doesn’t mean it doesn’t hurt, but you get used to it.”

Allan McKenzie’s success on social media continues to grow and has just seen him launch his own clothing line, ‘Tradeline Designs’.

He is a passionate advocate for Aboriginal artists to know their commercial value in the sector.

Allan’s art is extremely unique with its micro detail and explosion of colour, and people resonate with the complex stories that are provided alongside each piece.

He said his passion is to work creatively through his art as a medium, and that he found this to be immensely rewarding.

“I love that something optically pleasing gives you the door to open for someone becoming educated about culture.”
Allan McKenzie

“It gives them the ability to learn the story behind the beauty, and be able to ‘see’ the lesson or story told in the painting,” he said.

Allan said that the cultural-connection meant everything.

“It’s vital, for our emotional well-being, our Country’s sustainability, our strong family’s generational footprint, our Culture and its kinship systems/stories/values and lessons to be kept alive and practiced. The emotion, responsibility, peace and connection culture brings only empowers the individual,” he said.

“When the individual is empowered, confident and has self-worth, so do those around them. What happens to that community is then a ripple effect of this strength and positivity.”

Adjunct Professor Tracy Westerman is a Njamal woman from the Pilbara region of Western Australia. She holds a Post Graduate Diploma in Psychology, a master’s degree in Clinical Psychology and Doctor of Philosophy (Clinical Psychology). She is also a recognised world leader in Aboriginal mental health, cultural competency and suicide prevention, achieving national and international recognition for her work. 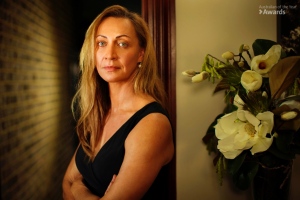 Tracy has spent over two decades working to reduce the burden of mentally ill health and suicide in Aboriginal communities.

Tracy said she has learnt a lot from her parents and mother especially. As an Aboriginal woman in 1964, her mother had to go to court to get her Australian citizenship.

“Both my parents didn’t go to school past Year 3, and they came from significant disadvantage; but despite of this, they modelled work ethic to us,” she said.

“In one generation my mum raised a daughter who is a West Australian of the Year, and has a PhD.”
Tracy Westerman

“I am living proof of why a young person should never let anyone convince them that they aren’t capable of achieving their dreams.”

Ash Barty began playing tennis aged four and throughout her earlier years, her tennis career went from strength to strength. At just 14, she was being picked for international tours, and at age 15, she won the 2011 Wimbledon Juniors. By age 16, she then took a well-deserved break to go fishing and play cricket.

Now, 23-year-old Ash has taken the world by storm and is currently ranked number 1 in the world, being the first Australian woman to reach that spot since 1976. This was to follow a ranking of 623 in the world in 2016, with her comeback to the sport.

Ash is warm, disciplined and an emotionally mature Indigenous woman, who is also incredibly gifted. She might also be the hero that Australian tennis needs.

Ash said she was pleased that there were now more opportunities for kids to play tennis, both male and female, of any race.

“I hope we can continue to create those opportunities and let kids know that this is an option for a career. And even if it’s not, it’s a sport that they can play for life.”
Ash Barty

As we celebrate and acknowledge these incredible Australians in their different fields, we salute the diversity and inclusivity of a multi-cultural Australia, starting firstly with the Aboriginal and Torres Strait Islander peoples.

Voice. Treaty. Truth. Let’s work together for a shared future. Happy NAIDOC Week to you all, from all of us at Amnesty. As individuals, we continually fall short, but together we are united.