Going straight from life as a university student in Perth to living in Looma, a small remote town inland from Broome, was quite an adjustment for Kate Ditchburn, who is beginning her third year teaching in the community.

Since traveling to the Pilbara community Punmu in high school, Kate said that she knew that she wanted to live in the Kimberley and work remotely.

“The job is completely different to other jobs, particularly as building relationships has never been more important than in an Aboriginal community,” she explains.

Unlike working in a suburban classroom, planning can be difficult and having an adaptable approach has been Kate’s key to success.

“One day you could have ten kids, the next it could be eighteen and then the next could be five. Also the range of student abilities in a class is huge – some kids struggle to write their names, whereas others are reading novels”.

Despite these challenges, the strong community bond is what Kate loves about Looma life. Although it took some time and many games of after-school basketball to bond with the kids, Kate believes that it was worth the effort.

“I am now feeling like an included member of the family,” she said.

Kate’s passion for sport was something she discovered she had in common with the Looma community.

“The football teams would travel up to six hours every weekend for their games, and half of the community goes along to support,” she explains. 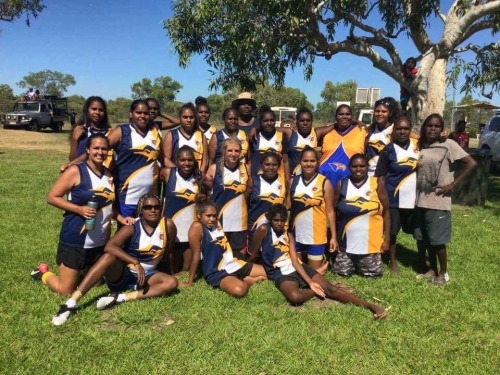 From this passion, Kate and her friend Sarah started a football team for girls in 2016.

“It wasn’t going to be anything big, just a great opportunity to get the girls involved in something for their health,” Kate said.

As soon as word went around town about the team, they had a coach come on board and a full team of girls signed up.

Kate said that the most rewarding aspect of creating the team was seeing the town come alive during sporting matches, and their passion for supporting one another.

“It gave the young girls hope and ambition, and we now have one of our girls who graduated last year playing down in Perth, which is an awesome achievement,” she said.

“I have no doubt that I will be seeing some of our Looma girls running around in the Australian Women’s Football League (AFLW)”.

Reflecting on her time living in a remote Indigenous community, Kate said she has learnt about the importance of community and family, and how western cultural influences have greatly impacted on this.

Kate said the government system for education support in communities has room for improvement.

“The people that do work and make a living for themselves often don’t receive any education support, and then cannot afford to send their kids to school,” she explains.

Kate said she sees herself remaining a part of the Looma community for years to come, and hopes to continue working to better the lives of her students.

“I would love to develop a health initiative that is effective in communities,” Kate said.

“I would like to see improved diets and education about nutrition, exercise and organised sports for kids; stuff that most of us take for granted”.